Company executives need a comfortable office, a good memory and an efficient secretary. If he can somehow do without the first two attributes, then a person performing many useful functions and utterly facilitating the work of his boss is a requisite.

The history of the holiday and the profession of secretary 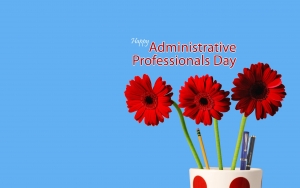 Every year secretaries from all over the world, as well as representatives of any other profession, accept congratulations on the occasion of their professional holiday from colleagues, bosses, friends, relatives.

The International Secretary’s Day holiday is celebrated every year on a Wednesday of the last full week of April. In 2016, a festive date falls on April 20 when the air already smells of greenery and the first flowers, and the birds delight everybody with their marvelous warbles.

The history of the International Secretary’s Day holiday

The International Secretary’s Day was introduced just over 60 years ago. It was the idea of Harry Klemfuss, a journalist and publicist from New York, who has clearly understood the importance of the profession in the business world, and he was trying to convey this fact to the public.

Indeed, a good, experienced secretary is key for the success of any executive, since the duties an office employee often extend far beyond typing the documents in a text editor of a computer, scheduling meetings and events for the boss and answering phone calls at the office.

A Wednesday of the last full week of April is the time of celebrating the Administrative Professionals Day.

These 7 days in turn are called the Administrative Professionals Week. In the year the holiday was created (1952) it was in the beginning of June, so it was called National, just as the Secretary&#39;s Day.