A peony is a worthy rival of a rose. Why? - Saholany.com
Skip to content
BEGIN TYPING YOUR SEARCH ABOVE AND PRESS RETURN TO SEARCH. PRESS ESC TO CANCEL
Login / Register Checkout Whishlist
Login / Register 0 | 0.00 Whishlist 1-855-439-5250
BlogSahola Floral Art & Event DesignWeddingsFlowersPlantsNews

A peony is a worthy rival of a rose. The Chinese consider it to be the number one flower as the Japanese praise a Chrysanthemum, and the Europeans praise a rose. The peony is the single representative of the genus Paeonia, which includes about forty species, the only genus in the family Paeoniaceae. 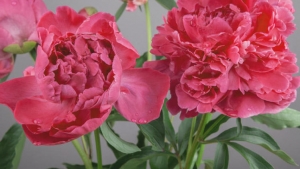 The name of the plant comes from the Greek word “paionioc” – healing. According to a legend, the plant got its name in honor of the legendary Doctor Pean, who healed warriors with its roots at the time of the Trojan War. By another legend, its name comes from the Thracian land Paeonia, where it used to grow in abundance.

A peony has long been attracting people with its beauty and splendor of flowering and wonderful rich aroma. It is the most popular flower in China, it symbolizes wealth, nobility and well-being.

In Chinese fairy tales it is often mentioned that a person, who reached the summit of power and wealth, certainly planted peonies in his gardens, but not the ordinary ones, but the magic ones that change the color of their petals four times a day. In ancient times it was forbidden for the common people to grow peonies. 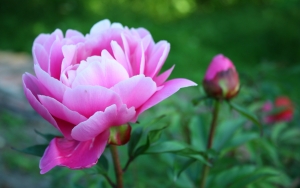 In ancient China they believed that the peony saves from evil forces, its roots used to be strung on a thread like beads and worn as a protection from harm. For the same reason the Chinese decorated their utensils with an image of this flower. And nowadays the Chinese give each other peonies as a sign of good wishes.

In ancient Greece the peony was considered to be the symbol of longevity, but in ancient Rome it symbolized pomposity and self-satisfaction, in India and Pakistan – clumsiness and foolish pride.

One legend tells how the goddess Flora, when preparing for the trip, offered flowers to choose her replacement for the time of her absence. After contemplating, the flowers chose a rose, and only the peony disagreed. It huffed and puffed for a long time, but remained an ordinary flower.

People began to cultivate peonies in the distant past. Initially peonies were used as edible and medicinal plants, and they were also used in religious rites.

In ancient times there were two centers of the peony culture: ancient Europe and China. The Chinese gardeners started the first breeding works, then in the seventh century the Buddhist monks brought the peony to Japan, where the skilled gardeners derived varieties, which were called the Japanese peonies.

Nowadays, a peony is becoming more wide-spread due to its splendid and attractive flowering and wonderful fragrance. And it can rightly be called the king of flowers.

The scientists believe that due to the presence of strontium, the treatment of tumors with the peony gives good results in some cases.

The drugs from the peony roots are used to increase appetite and improve digestion, as well as a sedative for insomnia and neurotic disorders.

The fans of exotic dishes cook jam and wine from peony flowers.

To make peony wine take 5-6 flowers of a burgundy and white or pink color that were picked in dry weather. Burgundy flowers will give wine a bright color, and the light ones – unique aroma and taste.

Separate the petals, throw away the middle part, sort them and put in a three-liter jar. Add 10 g of citric acid, 700 g of sugar, cover with cold boiled water leaving some room for fermentation. Close with a loose plastic lid and put it in a dark place for 30-40 days.

After fermentation the lightening process starts, then you should drain the wine, add 0.5 liters of vodka or diluted alcohol. Pour into bottles up to the cork, store in a cool place. This wine has a calming effect.

Per two peony flowers take half a kilo of sugar, half a teaspoon of citric acid, or better the juice of one lemon, and half a cup of water.

You should pick the flowers in the dry weather. Separate the petals, sort them, rinse, cover with cold water and bring to a boil. Simmer, gradually adding sugar, and at the end of cooking add lemon acid.

You get tasty and fragrant jam, which is good to eat when having flu and a sore throat.

If you choose the varieties of peonies with different flowering periods, your garden will be decorated with luxurious fragrant flowers of different colors from May to July, and until late autumn – with golden-bronze or burgundy-red carved leaves.